FGCU became my home away from home. 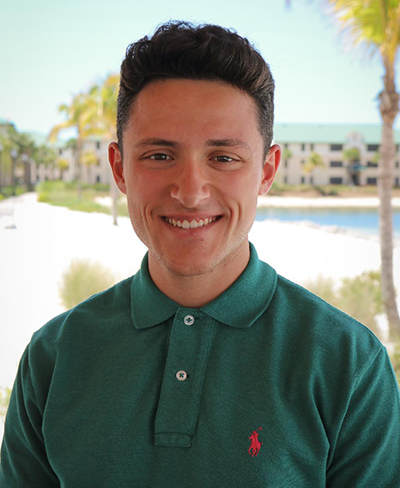 As an international student at FGCU from Chieti, Italy, Marco Del Grosso found the transition to studying in the United States made easier with the help of the International Services Office. Among the challenges he said he faced were “the different mentality, virtues and values of the American community.” Thanks to several staff members, “FGCU became my home away from home. Their genuine interactions with international students as well as Americans are one of a kind in this institution.”

As the campus go-to for international students, Marco said, the International Services Office has helped him with such bureaucratic matters as passport and visa issues (he said he found their assistance professional and efficient) as well as “helping me on a more personal level whenever I was going through difficult moments of indecision here at FGCU.”

The personal struggles an international student experiences are viewed by Marco as giving him an advantage over other students. “The competitive edge, personal growth, cultural exploration and travel experiences are all enhanced by the genuine difficulties that the student encounters on a path to success far away from home, parents and friends,” he said.

Marco’s journey to Fort Myers as an international student began at the University of Macerata in Italy, which has a partnership with FGCU, he said. Through the exchange program, two U.S. students go to Macerata to study every year and two students come to FGCU from Italy. “When I started studying law at the University of Macerata there was the opportunity to come here for a semester during my second year there. After a semester at FGCU, I was allowed to stay for another semester, and then I was able to remain here as a degree-seeking student.”

Florida wasn’t the first stop in his international education, though. When Marco was 17, he spent a year as an exchange student at a high school in Cumberland, Wis. As the recipient of a scholarship offered by AFS Interculture, he was hosted by a local family for a year of study, “living as an American in an American family,” he said, and earning a diploma from Cumberland High School.

At FGCU, Marco has been active in the Honors College and has been named to the President’s List. He has served as a University Ambassador and Eagle I Ambassador for the International Services Office,

“helping international students transition to FGCU and preparing American students to soar in other parts of the globe.”

With the help of the International Services Office team, he also launched a new venue on campus, the FGCU International Friends Café.

Marco had the chance to briefly do some research for President Mike Martin. Unfortunately, his participation in the project was cut short because he was appointed as a resident assistant, which expended all of the hours he’s allowed to work according to the terms of his visa.

“In my short but intense life President Martin is the best leader I have ever had the honor and pleasure to meet,” Marco said. “The research was mainly focused on statistics and graphs all related to higher education and the president’s interest in how to better serve the community. I would say that this shows the character of a great leader — constantly committed to improve our great university and the surrounding community.”

As Marco prepares to graduate in May 2019 with a legal studies degree, he’s applying to law schools — in the United States, to further his international education.