It's your legacy, let's continue your success

Donor support for FGCU comes in many forms. The stories highlighted here have a common theme - the donor wanted to shape the future of FGCU and impact student lives in the classroom and as they make their way in life.

Meet some of our wonderful donors Barron Collier said he and his wife were motivated to make the gift because "we wanted to give back to Collier County.

Dana and Barron Collier III, supporters of Florida Gulf Coast University for two decades, enhanced their giving with a pledge of $4 million to support scholarships for Collier County students.

Barron Collier said he and his wife were motivated to make the gift because "we wanted to give back to Collier County for being so great to us. We have watched the creation of this new university and have seen what went into it. It was fascinating. FGCU is just going to continue to grow and get better.

"We need to look at the next generation to be tomorrow's leaders of business. We need to be investing in the best education possible for them. We feel blessed to be able to give back in this way and hope others will be motivated to give as well."

The Colliers first endowed a scholarship fund in 1995, two years before FGCU opened its doors. Since then, they have developed an even closer relationship after seeing their daughter attend and graduate from the university.

"We were impressed by how personable the faculty and staff members were and how the professors really get to know their students," he said.

The Dana and Barron Collier III Scholarship Endowed Fund awards scholarships to deserving students from Collier County. The recent gift comes in the form of a $4 million life insurance policy.

Barron Collier III was named for his grandfather, an advertising magnate and entrepreneur who founded the company that still bears his name. Collier III, who goes by Barry, serves as the chairman of the board of the Barron Collier Companies, which owns significant amounts of land in Collier County, as well as interests in real estate, mineral management and agriculture. When shopping for insurance, Denise Heinemann, found a way to leave FGCU a gift that wouldn't cost her a dime.

Insurance policy yields surprising benefits at no cost to policyholder

When shopping for insurance, Denise Heinemann, former dean of the College of Health Professions and Social Work, found a new option that allowed her to leave FGCU a gift that wouldn't cost her a dime.

By naming the university as a beneficiary of the no-cost institutional charitable benefit rider on her new universal life insurance policy, FGCU will receive 1 percent of the policy's face value. The best part: It will be paid by the insurance company and won't be deducted from the policy itself.

"After comparing companies, when I saw that extra benefit, there was no contest," she says. "It was an eye opener." Leo Boisvert, a member of the FGCU Planned Giving Advisory Committee and managing partner of Private Wealth Consultants in Fort Myers, says, "Policies are like cars: They change. They add new bells and whistles."

He advises that because of periodic changes, people should review their policies and compare them to newer forms every few years.

With policies such as universal life, "some people are lowering their premiums and taking the money they save and donating it," Boisvert says.

As a lifelong entrepreneur and innovator, the late Naples philanthropist Frank G. Daveler knew a good idea when he saw it.

As a lifelong entrepreneur and innovator, the late Naples philanthropist Frank G. Daveler knew a good idea when he saw it.

Daveler, whose generous support of Florida Gulf Coast University was recognized with the naming of the Daveler & Kauanui School of Entrepreneurship, was a highly successful businessman. He launched and sold more than a dozen companies in the aerospace, engineering and manufacturing fields.

To many he encountered and influenced, Daveler was the epitome of an entrepreneur. So his decision to invest in FGCU’s entrepreneurship program from its beginnings reflected a strong belief in its potential for success. His vision and his purposeful giving plans helped the program grow over a short time into the full-fledged school established shortly before he died in 2020.

“His true generosity is not well known. He has helped countless students through scholarships, mentoring and being a sounding board,” said the school’s director, Sandra Kauanui. “His legacy will last forever. Frank always said he wanted to be our partner ‘in this life and the next.’”

Bill Rice, senior associate vice president of University Advancement, said Daveler “invested in things that he believed in — FGCU, Dr. Kauanui, our students and our mission.”

His 2020 pledge of $4 million will help fund programming and facilities, including a space in the school for alumni entrepreneurs.

There’s no question Daveler has made a lasting difference at FGCU, as the school that now bears his name continues to grow in enrollment, reputation and presence on campus. The school is home to one of the fastest-growing majors on campus. And in 2019, FGCU was named the top college or university in Florida and 30th in the country for undergraduate entrepreneurship studies, according to The Princeton Review and Entrepreneur magazine. More than 400 businesses have been started by FGCU students and alumni since August 2016, a tribute to Kauanui and the school’s success as well as a boost to economic growth.

“One of our goals, Frank’s and mine, was to build something to last, to benefit students for generations,” Kauanui said. 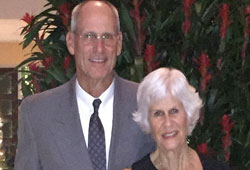 Cornells establish scholarships for students in The Water School

The Cornell's both believe that by bringing people up through education, society will be better.

Cornells establish scholarships for students in The Water School

When Kenneth and Lindsay Cornell stopped spending summers up north and committed to living full time in Bonita Springs, they looked around for something to get involved in — intellectually, socially and philanthropically — to connect themselves better with the community.

A financial advisor nudged them toward Florida Gulf Coast University, where they started attending events and considering options for planned giving. They’d already established scholarship funds at a couple of bigger institutions in Michigan and Florida, but at FGCU they found something different that appealed to them.

“The whole campus feels welcoming, down to earth,” says Ken Cornell, who had worked in information technology at Ford Motor Co. “The people there reflect that. Everybody is very nice. I think that’s important especially for kids who, in some cases, may be the first in their family to go to college. We also appreciate the intention of getting kids through in four years. We like everything about FGCU.”

Lindsay Cornell had taught biology in middle and high schools for 27 years, so she, too, had a strong interest in supporting education and helping students who might face financial challenges to earning a degree.

“Ken and I both believe that by bringing people up through education, society will be better,” she says. “We were looking for some way to help in the area. I was watching the news one day, and they were talking about The Water School at FGCU. I said to Ken, ‘We should do a scholarship there.’ It was a just a done deal. Water is the lifeblood of Florida.”

“It was a perfect fit,” Ken Cornell adds. “Everything around here is related to water in some shape or form. Fresh water, saltwater, red tide, blue-green algae, the Everglades, hurricanes. The Water School is going to be a showplace to study all that.”

“In so many places, college is so expensive that it becomes difficult for kids,” Lindsay Cornell says. “What we really like about FGCU is that it’s affordable. It allows a lot of first-generation kids to be able to graduate.”

For more information about establishing a gift like the Cornells’, call FGCU Advancement at 239-590-1067. 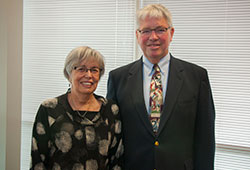 Alice and Dean established a $1 million endowment to support next generation of educators.

It began with a single piece of mail.

“We got a letter asking if we would donate to a first-generation scholarship,” says Alice Fjelstul of the initial contact she and her husband, Dean, had with Florida Gulf Coast University.

They sent a $500 check and were subsequently invited to the President’s Scholarship Luncheon to meet the scholarship recipient “who was a remarkable woman struggling with drug addiction in her family and was working part time to get an education and get ahead,” Alice Fjelstul recalls. “After the luncheon my husband went over to reception and wrote another check for $500.

“We come from families in which education was extremely important. We marvel at these young adults who are struggling to get an education so they can have a bright future. We have three children and they are doing well, so we have found uses for our money that we believe in strongly.”

Since that first scholarship luncheon, the couple has increased their giving substantially, establishing the Alice and Dean Fjelstul Education Endowment with a $1 million deferred gift commitment to provide scholarships for full-time juniors and seniors in the FGCU College of Education. Special consideration may be given to those who plan to teach the visual arts.

“We learned that education students have a hard time doing their student teaching because they don’t have enough free time to work, so it seemed like something we could do to help them,” Alice Fjelstul said. The visual art component “was encouragement to keep art in the schools.”

The Fjelstuls have taken a slightly different approach with their gift.  Rather than the endowment lasting in perpetuity and paying out about $40,000 per year, their endowment will pay out $125,000 per year for teacher education scholarships.  Because of the higher payout, the fund will last only about 10 years.  But, Dean Fjelstul says, “this will provide a lot more support for a lot more future teachers, sooner.  Our public education system, which has been a basis for American success for over 200 years, needs a lot of help.  We believe that more and better teachers are critical. The FGCU College of Education has been doing a great job and it deserves our support.”