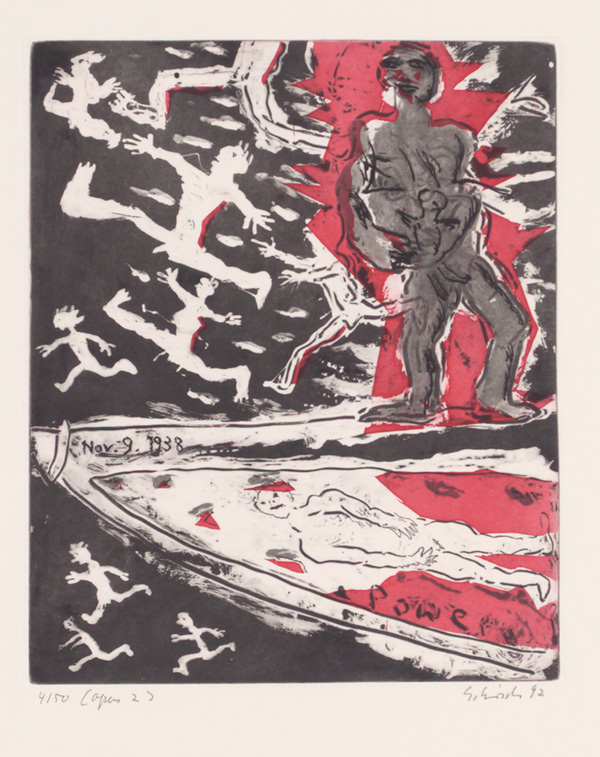 Kristallnacht - Night of the Crystal Death is a portfolio of ten works - published in North Carolina by Littleton Studios in Spruce Pine - that confront the horror of a nationwide pogrom against German Jews that took place on the night of November 9, 1938. This important and challenging group of works provided artist Erwin Eisch with an opportunity to confront a horror from his homeland's past. Eisch, who has childhood memories of Kristallnacht, hails from the Eastern Bavarian village of Frauneau, famed for its glass blowing and cutting. Eisch's medium is also glass, and he has created his Kristallnacht portfolio as a means to "relieve some of the clinging shame that weighs down upon us Germans, and to bring courage to all those who oppose hate and violence and the destruction of the environment, today and forever."

Eisch says, "I was twelve years old when windows broke and synagogues were set on fire during the Crystal Night. I remember that our family talked about this crime with disgust and quaking fear. There were no Jews in the glassblowing village of Frauenau at that time. The news of the bloody events came to us via acquaintances. I can still feel that fear, and that is the reason why I was so glad to tackle this issue."

The horrific attack, which was orchestrated by the German government to seem a spontaneous uprising of the German people, portended the Holocaust. Nearly all German synagogues, and many cemeteries and Jewish businesses, were destroyed within a few hours, and up to an estimated 2,500 deaths are attributed to the event, either from direct riot violence or the resulting 30,000 arrests and concentration camp internments of German Jews. The name Kristallnacht itself is a source of some controversy, because the term connotes the original sardonic intent of Nazi propagandists to associate the events which, for most Germans, comprise a repulsive piece of history, with a glamorous metaphor.

Sponsored by the State of Florida, Department of State, Division of Cultural Affairs and the Florida Council on Arts and Culture; and WGCU Public Media