FGCU Alumni Megan Kissinger (Fort Myers, FL), class of 2004, and David Shepard (Honolulu, HI), class of 2013, are engaging art’s historic role in raising public awareness about threatened habitats and species in their own tropical environments. Through an aesthetically broad and creative process, they are reconnecting people to the rich tapestry of life.

Sponsored by The Beaches of Fort Myers and Sanibel

Illuminated: A Museum Conservator Ponders Nature as a Relic

In my work as a museum conservator I am constantly aware of the damages of time both natural and man-made. As I go about my duties, my work keeps me examining everything; how it works, what condition is it in; what factors affect it's stability. What repairs can I make that won't eventually do more damage that just leaving it alone? That's how I have begun to think about our natural world. If I apply these same questions of museum conservation to nature, there is little difference. And while a museum conservator preserves cultural heritage for future generations, I often wonder who will preserve our natural heritage. The works in this show were created with all of these questions swirling around in my head. Using cast-off and semi-ruined objects, including a series of my own paintings that were damaged in shipping, I have attempted to illuminate the beauty that is left in them. To show the world that while imperfections exist, all is not lost. With love, and one eye closed, we can begin to "conserve" nature and again know the beauty in the world. In a way, these paintings are a memento mori. When its all over, this grand party we are enjoying called modern life, who will pick up the pieces? Who will make right was has been overturned? Who will be the responsible ones and mop up the spills? The sheer certainty that everything around us will someday go away lurks just under our consciousness. More importantly, we will someday go be gone. The skull underneath our pretty face is just a touch away. What will be the relics we leave behind?

Megan Kissinger is an FGCU class of 2004 alumnus. She resides in Fort Myers, FL and works as a Museum Conservator and Exhibit Designer for Edison and Ford Winter Estates. As an artist, Megan is an acrylic painter and artist who is interested in conservation. She depicts the art of southern North America in all its wild glory in order to show viewers the beautiful natural world that is disappearing before their very eyes. 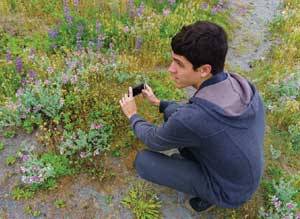 To raise awareness and appreciation of rare and endangered native Hawaiian plants, I create drawings and continuous print patterns. Many of the plants I represent in my work are found nowhere else in the world. They live on the edge in visually stunning environments. I use the patterns I create as the basis for a line of dress shirts known commonly as Hawaiian shirts or in Hawaii as Aloha Shirts. The word aloha is used as both a greeting and a farewell, but much like the greeting namaste, it has deeper significance. Aloha means love, peace, compassion, kindness, and humility. It is a reminder of our interconnectedness. In creating and sharing these beautiful shirts and patterns, I hope to inspire people. I hope people reconnect with the value of these special plants, and move with aloha.

David Shepard is an FGCU class of 2013 alumnus. Growing up in rural southwest Florida, he developed a deep love of the environment, plants, and how they intersect culturally and historically. He moved to Hawaii after graduating and at the University of Hawaii at Manoa he completed a master’s degree in tropical plant and soil sciences. While interning for the National Park Service on a remote Hawaiian island he was troubled by both the intense threats to the stunningly beautiful native Hawaiian plants and landscape he was working to protect. At the same time, funding cuts and a hiring freeze highlighted the fact that greater exposure to the public was needed if the allocation of funding was to reflect the value of these plants. While teaching English in Southeast Asia, David was inspired by the print styles and patterns that he encountered, including batik shirts. In Myanmar, he had his first dress shirt made using local patterns. Returning to Hawaii, he was further inspired by the success of Hawaiian shirts, known locally as aloha shirts. He decided to create a dress shirt line called ‘Aloha, David’ that showcases native Hawaiian plants. He taught himself how to use Adobe Illustrator to make continuous print patterns and took up sewing classes until he was able to make his first aloha shirt. David has continued to work closely with these plants as a horticulturist. He has worked for the National Park Service on Molokai and the National Tropical Botanical Garden on Kauai. He currently works for Lyon Arboretum, a part of the University of Hawaii at Manoa in Honolulu on the island of Oahu. In his free time he loves to hike and surf.