From idea to impact

Education inspires growth, creates prosperity, strengthens community. With that idea, we launched a new university 25 years ago for Southwest Florida. Created a pipeline of teachers and nurses. Social workers and scientists. Engineers and entrepreneurs.

For 25 years, our students have served the community. Interned at local businesses and started their own. Brought a community together with the arts, athletics and advocacy.

Together, we built a stronger Southwest Florida. From idea to impact in just 25 years. Imagine what we can do in the next 25.

FGCU has made an indelible impact on Southwest Florida since 1997. Learn more about the milestones and achievements we have celebrated in the past 25 years. 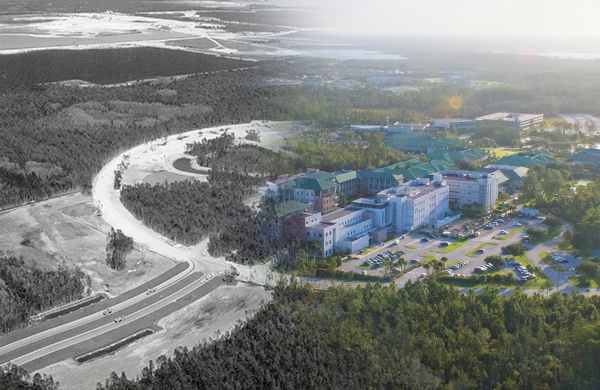 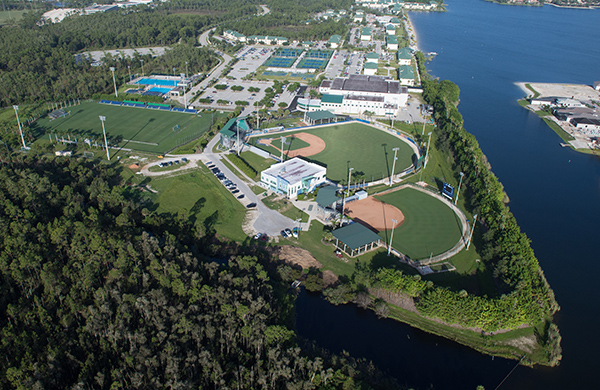 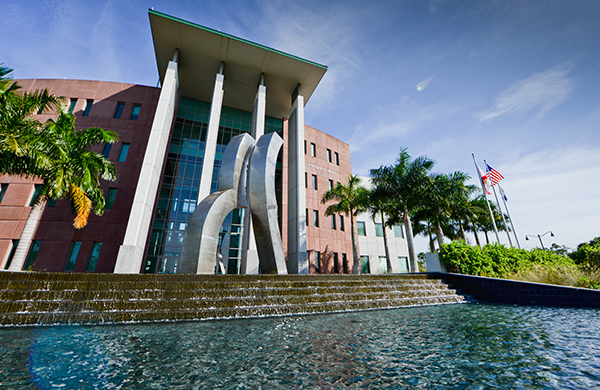 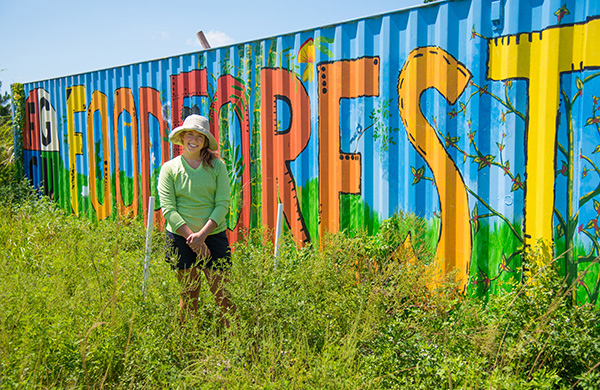 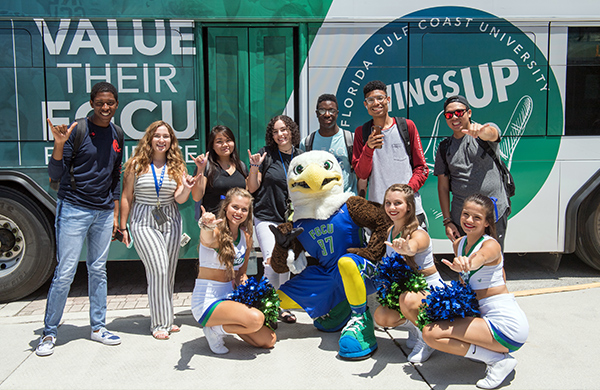 The biggest story in 2016 was that the University started the search for its fourth president with the pending retirement of Dr. Wilson G. Bradshaw on June 30, 2017. The Presidential Search Advisory Committee was chaired by Trustee Ken Smith during the process that would culminate with the FGCU Board of Trustees selecting the University’s next leader, pending approval by the Board of Governors. Trustees elected Dudley Goodlette the board’s chair this year, succeeding Robbie Roepstorff, while Dr. Shawn Felton is vice chair.

FGCU continued to be a leader in making higher education affordable, with the University again earning positive recognition from Gov. Rick Scott and the Board of Governors for not increasing the cost of tuition, fees and housing for a number of consecutive years. FGCU also earned praise for its innovative idea to increase four-year graduation rates by creating the Soar in 4 program, which effective with the 2015-16 academic year gives freshmen the chance to get reimbursed for out-of-pocket tuition costs from their first year if they graduate in four years and meet certain criteria.

Academic Building 7 was renamed Seidler Hall, dedicated to the generosity of Sanibel residents Lee and Gene Seidler, and Lee Seidler’s daughter, Laurie, who created a fund that will strengthen the College of Arts & Sciences.

Two students became the first in FGCU history to be chosen for prestigious Fulbright grants to study or teach abroad. Emilio Feijoo of Naples, who graduated from FGCU in December 2015 with bachelor’s degrees in philosophy and English, was selected for a Fulbright Study/Research Grant to pursue graduate studies in comparative literature at the University of Essex in Colchester, England. Lori Boegershausen of Palm Harbor, an Honors Program history graduate, was offered a Fulbright English Teaching Assistant Grant to teach in Germany for a year. Both students are the first in their families to earn college degrees and completed their undergraduate programs with the help of FGCU Foundation scholarships.

The University’s inaugural Give Day — held April 26 — was a resounding success, with 207 supporters giving $1.18 million to benefit students and university programs. The one-day fundraiser, expected to become an annual event, was an effort to build enthusiasm and giving among the growing alumni base as well as faculty, staff and the many members of the community with ties to the university. A $1 million gift came from a donor who wishes to remain anonymous but wanted to make an impact.

On May 9, FGCU joined nine other state universities in Florida and more than 1,500 other campuses nationwide to become smoke- and tobacco-free.

Dr. Elaine Nicpon Marieb of Sarasota, for whom Marieb Hall is named, was awarded an honorary doctoral degree by the University on May 1 in recognition of her significant contributions to the education of nursing and healthcare professionals throughout her career, and for her long-term involvement in, and support of, FGCU. The honorary doctoral degree is only the sixth to be awarded in the institution’s history. The College of Health Professions and Social Work was in the news again in the summer when David W. and Dr. Alise G. Bartley of Ohio, soon to be residents of Bonita Springs, pledged $1 million to the college.

Dr. John Woolschlager joined FGCU as the Backe Chair in Renewable Energy and director of the Emergent Technologies Institute, which opened this year in a 24,000-square-foot facility on 6½ acres off Alico Road that includes a 2½-acre energy park.. Woolschlager, a professor of environmental engineering and the director of engineering graduate programs, succeeded the inaugural Backe Chair, Dr. Joseph Simmons, who retired.

FGCU’s continuing support for those who served — and some who still serve — our country manifested itself in a new program to help military veterans get started in business. The University was one of five institutions in the state to pilot the Veterans Florida Entrepreneurship Program, which provided online and hands-on tutoring, instruction and training through the spring and into summer, with finalists getting the chance to pitch their business models to potential investors at FGCU’s new Emergent Technologies Institute, located just northeast of campus. Amy Ridgway coordinated the program, which was implemented by faculty members Dr. Sandra Kauanui, director of the Institute for Entrepreneurship and chair of the management department in the Lutgert College of Business, who helped craft the statewide curriculum; along with Dr. Eric Arseneau, assistant professor of entrepreneurship; and Dr. Joseph Cuiffi, assistant professor of Renewable Energy Engineering.

Meanwhile, the Institute for Entrepreneurship launched the new Runway Program — a startup incubator exclusive to FGCU’s aspiring student entrepreneurs at no cost to them. Students can work on building new companies with help from entrepreneurship faculty and mentors.

Basketball was a blast at FGCU in 2016 as both the men’s and women’s teams achieved postseason success. The men captured the Atlantic Sun Conference Tournament title to make the NCAA Tournament First Four game, where they destroyed Fairleigh Dickinson by 31 points before losing to No. 1 national seed North Carolina in a game that stayed close into the second half.

The women — upset in the A-Sun Tournament championship game to miss out on another shot in the NCAAs — turned the disappointment into delight for the Southwest Florida community by winning five consecutive WNIT Tournament games at Alico Arena. A loss on the road to South Dakota in the WNIT title game ended the season, but not before the team won 33 games and earned Coach Karl Smesko his sixth consecutive A-Sun Coach of the Year Award and the distinction as espnW Mid-Major Coach of the Year.

The FGCU Effect reached the Summer Olympic Games in Rio de Janeiro, Brazil, with three athletes who wore the Blue and Green competing against the greatest competitors from around the world. Lani Cabrera swam for Barbados in the 400-meter freestyle, while Evita Leter was on Suriname’s team in the 100-meter breaststroke. Those two joined another athlete at the Games with FGCU ties — former volleyball star Brooke (Youngquist) Sweat, who teamed with Lauren Fendrick to compete in sand volleyball.

But those three aren’t the only student athletes who have excelled. At May’s games of a different sort — the Invictus Games in Orlando for those injured serving in the military — junior exercise-science major Josh Wege won a gold medal competing for the U.S. team in the 400-meter race. Recently graduated women’s golfer Sara Detlefsen made history in July as the first Eagle to compete in an LPGA event, the Marathon Classic in Sylvania, Ohio.

Also, some former FGCU athletes signed professional contracts this year. Whitney Knight —  a two-time A-Sun Player of the Year, three-time First Team All-Conference pick and an Associated Press honorable mention All-American — became the first Eagle drafted by the WNBA, going 15th overall to the Los Angeles Sparks. Others who are competing at the next level are Rodrigo Saravia and Aaron Guillen in Major League Soccer and Jake Noll in baseball. Noll ended his FGCU baseball career by joining Chris Sale as the only Eagle to earn first team All-American recognition — and the only player to make All-America teams in separate seasons — when he got the recognition from DI Baseball. Noll, who is in the top 10 in FGCU history in just about every offensive category, also was named a second-team All-American by both Collegiate Baseball and Baseball America.

As for club sports, the DII Hockey Club beat Liberty, 4-1, in West Chester, Pa., in April to capture its second National Club Championship.

FGCU was recognized by Sustainable Florida for its comprehensive efforts to promote and practice sustainability in operations and education. The university received the 2016 Sustainable Florida Best Practices Award in the universities and colleges competition category on Sept. 15 at the Working on the Green Sustainability Summit in Fort Lauderdale. FGCU was also a finalist in the government and leadership categories.

The Family Resource Center at FGCU earned accreditation from the National Association of the Education of Young Children (NAEYC) — the world’s largest organization working on behalf of young children. To earn NAEYC accreditation, the Family Resource Center went through an extensive self-study and quality-improvement process, followed by an on-site visit by NAEYC assessors to verify and ensure that the program met each of the 10 research-based program standards, and hundreds of corresponding individual criteria.

The 25th Annual Founder’s Cup Golf Tournament hosted by the FGCU Foundation broke previous records for participation and fundraising, netting more than $135,000 for scholarships and programs that advance the university’s mission. The tournament, held Oct. 21 at Quail Creek Golf Club in Naples, drew 61 teams of golfers and raised more than ever before.

The university earned a 2016 Horizon Council Healthy Workplace Wellness Award in recognition of its comprehensive efforts to promote wellness among its employees.The award was presented Oct. 28 at the Horizon Council general membership meeting, where employers were honored in three size levels. FGCU, which employs more than 1,200 faculty and staff, was recognized in the large-business category along with LeeSar Inc.

The Bower School of Music & the Arts accepted a gift of great significance made in December by Maurizio and Laura Nisita of Estero. Half of their gift toward music excellence will be designated for scholarships and the balance will be established in an endowed fund to support the guest musician performance series. In recognition of their generosity, FGCU titled that series the Nisita Concert Series, effective in fall 2017.

Jeffrey Perry, visiting assistant professor of history, was awarded a prestigious National Endowment for the Humanities Post-Doctoral Fellowship at the Library Company of Philadelphia.  The fellowship enabled  Perry to do more extensive research on a book manuscript he’s writing about the role of churches as judicial tribunals in the early days of the American West.

FGCU was awarded Most Engaged Campus of the Year in the State University System for the third time in eight years, but Eagles also were recognized with four individual Campus Compact honors at a November ceremony in Tampa — most notably FGCU President Dr. Wilson G. Bradshaw’s lifetime achievement award for a legacy of service. FGCU has been a member of Florida Campus Compact since 2000 and won Engaged Campus of the Year in 2008 and 2011. Besides Dr. Bradshaw’s receipt of the Thomas E. Gamble Service Legacy Award, named in honor of the late president of Brevard Community College (now Eastern Florida State College), other FGCU honorees announced earlier this year were: Lauren Morimanno, the 2016 Campus Compact Newman Civic Fellow; Noelle Stone, the Student Excellence in Service Award winner; and Katharine O’Connor, honored with the Community Engagement Educator Award.

University virologists and researchers Sharon Isern and Scott Michael  developed a treatment for dengue virus expected to reach human clinical trials that also could be effective against Zika virus. On the Miami-Dade battlefront where Zika was discovered in the U.S., FGCU graduate Darrel Bagiotti (’14 Environmental Studies) led a team of about 140 employees of Clarke, an Illinois-based global producer of environmental products and services, in that company’s ground fight against Zika-spreading mosquitoes.