How an idea made an impact

It started with land and a grand plan and these words describe the birth of Florida’s 10th state university on a 760-acre spread of pinewoods and wetlands between Fort Myers and Naples just off the southwest coast of the Sunshine State.

With a commitment to student success, sustainability, technology and innovation inside and outside the classroom, FGCU has proven itself to be a comparatively young, but institutionally confident performer on the higher-education spectrum.

From academics to athletics, from infrastructure to impact, from our faculty, staff and students to our Foundation friends and alumni, we have enjoyed 25 glorious years of first changing our region, and now changing the nation and world. 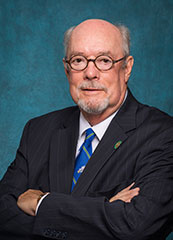 Since our beginning, we have measured success one student at a time. Today our 22:1 student-to-faculty ratio and average class size of 33 students ensures a more personal education experience. Professors know their students by name, and many of our earliest professors continue to be engaged in hands-on learning for current students.

Fort Myers banker W.T. “Tommy” Howard had lobbied for a Southwest Florida branch campus of the University of South Florida in the 1970s as a member of the Commission on the Future of Florida’s Public Universities. Howard’s hope became a reality in 1982, when USF opened a branch adjacent to what was then Edison Community College in Fort Myers to begin a four-year institutional presence in the region.

FGCU’s establishment would come along nine years later in 1991. Charlie Edwards was planning committee chair of the state Board of Regents when the push for a four-year school in Southwest Florida took shape, largely due to behind-the-scenes work of local state legislators Reps. Keith Arnold, Mary Ellen Hawkins and Vernon Peeples and Sen. Fred Dudley. Edwards became chair of the Board of Regents and helped persuade the Florida Legislature to pass legislation in January 1991 that recommended Florida’s 10th state university be built in the southwest region, and Gov. Lawton Chiles made it official that May when he signed a bill authorizing the school.

The following year, the Board of Regents selected a 760-acre site donated by Ben Hill Griffin III and Alico, Inc., on which to build the University. On April 26, 1993, Dr. Roy E. McTarnaghan, who served as the executive vice chancellor for the State University System of Florida, was appointed president of the yet-unnamed “New University of Southwest Florida.” Founding President McTarnaghan and a small group of five employees — including now-retired Barbara Krell, executive assistant to the president; and Susan Evans, chief of staff — set up shop in downtown Fort Myers in space provided by the Lee County Commission.

Also created in 1993 was a fundraising foundation for the University that Edwards helped form and for which Howard would serve as first board chair.

In 1994, the up-and-running operation would finally get a banner under which to operate when — after a process that McTarnaghan wrote “entails a legislative endorsement, with hundreds of names and thousands of people involved” — the new institution was officially named Florida Gulf Coast University. That February, the initial phase of campus construction was revealed, and the University started taking physical shape Nov. 28, 1995, when more than 600 people watched student leaders from area high schools turn shovels of dirt at an official groundbreaking ceremony. McTarnaghan would remember that the University finally secured necessary permits to develop the environmentally sensitive site just two days before the groundbreaking, the culmination of what he called a “high-stakes poker game.”

The Board of Regents approved inaugural degree programs in March 1996, and the building of a campus for students, faculty and staff finally came together when FGCU opened on schedule Aug. 25, 1997, with 2,584 students — including FGCU’s first enrolled student, Mariana Coto — and $38 million in assets collected by the FGCU Foundation.

The following year, the first official FGCU commencement took place in May with 81 students graduating, and in the summer of 1998, the first phase of student housing opened.

It would be a transitional year in 1999. McTarnaghan officially retired May 1 after announcing his intent to do so the previous September, having successfully planned and opened the first new state university in Florida in more than 20 years. In June, FGCU celebrated notification it had earned accreditation by the Southern Association of Colleges and Schools (SACS) in record time. And in July, the Board of Regents named Salisbury State University president Dr. William C. Merwin as FGCU’s second president, and he hit the ground running from the moment he clocked in on campus Sept. 16, 1999.

Armed with the advocacy that came with the 2001 installation of a University-centric, governing FGCU Board of Trustees with Southwest Florida representatives for oversight answering to a Board of Governors (which succeeded the Board of Regents), FGCU would explode with the advent of the new millennium.

With the help of a Southwest Florida community that lent its expertise and opened its wallets, in came an athletics program and its accompanying first-class facilities, new academic buildings and residence halls, and expanded degree offerings — not to mention the Renaissance Academy outreach program that took FGCU-sponsored education into the adult community.

In an eight-year turn as president that would end with his 2007 retirement, Merwin orchestrated seismic growth that almost tripled both enrollment and the number of buildings on campus, and more than doubled the annual operating budget — all due in large part to the almost $220 million in private gifts and donations he is credited with helping to raise during his tenure.

That incredible track record of growth in enrollment, infrastructure and impact has continued under the leadership of Dr. Wilson G. Bradshaw, who in 2007 took over as FGCU president from interim Dr. Richard Pegnetter, founding dean of the Lutgert College of Business, who stepped in after Merwin’s retirement. Bradshaw was named FGCU’s third president by the FGCU Board of Trustees on Aug. 25, 2007 — the 10-year anniversary of the University’s opening day for students.

Under the guidance of Bradshaw, who retired as president in June 2017, the university celebrated its 20th anniversary. FGCU has become a catalytic leader in stimulating regional economic growth, as a living laboratory that stays true to its mission of sustainability, and as a cultural and entertainment hub in the fine and performing arts and athletics. From the seeds planted by the local movers-and-shakers who made Florida’s 10th university happen, 2 1/2 decades of visionary progress and innovation have created an institution that has:

What started historically as land and a grand plan has evolved today into The FGCU Effect — two-plus decades of meaningful, far-reaching impact.