One of the most vivid depictions of the horrors of Nazi concentration camps, the French documentary Night and Fog (Nuit et brouillard) was directed by Alain Resnais and released in 1955. Filmed at several concentration camps in Poland, the film describes the lives of prisoners in camps such as Auschwitz and Majdanek in order to portray the horror of the brutal inhumanity of the Nazis. Night and Fog combines color and black and white footage with black and white newsreels, footage shot by the victorious Allies, and stills, alternating between past and present.

This short film runs for about 30 minutes. After the showing, Dr. Bartrop will give a shot presentation regarding how the film was shot and received after its release. Many studies have been made of those whose actions describe them as perpetrators of the Holocaust. In recent times, some important studies have also included, or focused on, women as perpetrators. In this lecture, Dr. Bartrop considers five such women, who all knew each other and worked together at various times in Nazi concentration camps as guards over Jewish prisoners. Examining their careers provides useful insights into why some German women joined the SS guard detachment, where they were trained, the locations of their postings, and their respective fates. The presentation explores their antisemitic actions, trying to locate them within the broader context of Nazi concentration camp training dating from the years prior to them joining the SS. 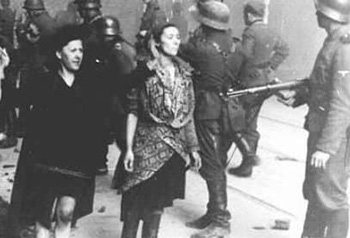 This presentation looks at a number of ways in which women resisted the Nazis in the concentration camps during the Holocaust. Several initiatives can be considered. These range from planned and deliberate acts abetting armed confrontation; to saving lives through the positive adoption of means intended to thwart Nazi policies; to finding ways to pass messages from one part of the camp to another; to the very rare cases of escape; to myriad acts of helping to maintain morale that served to crack the edifice of Nazi-imposed terror. By examining these approaches to resistance, Dr. Bartrop will argue that physical confrontation took numerous forms beyond that of combat and that each, in their way, enabled women to take some measure of control over their fate in an environment in which survival and success were in no sense guaranteed. Bergen-Belsen was a World War II concentration camp, situated not far from the town of Celle in north-western Germany. It was originally designated a camp for political prisoners, and, contrary to the image many people today have of Nazi concentration camps, it was not equipped with gas chambers or crematoria. Towards the end of World War II, however, prisoners were subjected to a very limited diet, and most deaths at the camp resulted from starvation, malnutrition, or diseases like typhus and dysentery resulting from an unsanitary water supply. The guards at Bergen-Belsen were notoriously brutal, especially the female contingent, and the camp was considered an especially horrendous place to be imprisoned. In this lecture, Dr. Bartrop will look at the state of this camp—whose images are today iconic of the horror of the Holocaust—and how news of this horror was brought to the world.