These artifacts were selected from the FGCU Bradshaw Library Archives’ physical exhibition To Life: The Liberation of Ravensbrück, which closed prematurely due to the spread of COVID-19.

The artifacts were on display in the United States for the first time. The Archives team thanks the Malmö Museum, the Polish Research Institute at Lund University, and the United States Holocaust Memorial Museum for their ongoing cooperation in these unprecidented times.

(Select each artifact for a full screen display)

Beginning in 1937, the Nazi party created a system of badges marking prisoners in concentration camps, Ravensbrück included. This system included a classification poster that listed the shape and color of badges for people that the Nazis deemed as “subhuman.” Each color represented a different group of people targeted by the Nazis. These groups included: 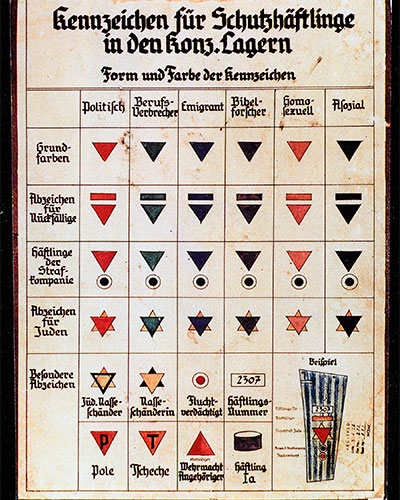 The White Bus Rescue Action took with it 6,000 food parcels from the Swedish Red Cross. The food in the parcels included boullion cubes, biscuits, jam, dried milk powder, sardines, herring, and cigarettes. After their long period of hunger, the prisoners ate eagerly. Many of them ate too much, too fast. Nurses tended to them as best as they could on the buses. Once in Malmö, the women and children received further medical attention.

On loan from the Malmö Museum, Sweden. 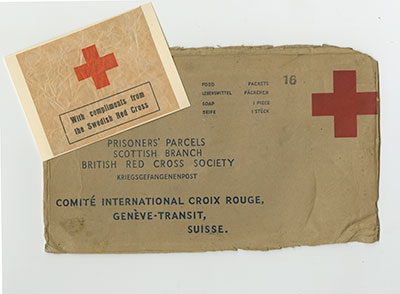 The wall installation was created using transport logs of Polish citizens rescued during the White Bus Rescue Action. The pages are reproductions; the paper has been manipulated to create texture and movement. While the pages have been duplicated, the installation is intended to represent the 15,500 survivors saved by the heroic actions of Count Folke Bernadotte and the courageous men and women that traveled across enemy lines on the Swedish White Buses. This exhibition would not have been possible without the efforts of archivist Zygmunt Łakociński, who had the foresight to collect 512 in-depth interviews with Polish survivors and the materials that they brought with them when they arrived at Malmö Harbor in 1945. Łakociński founded the Polish Research Institute at Lund University Library, Sweden. 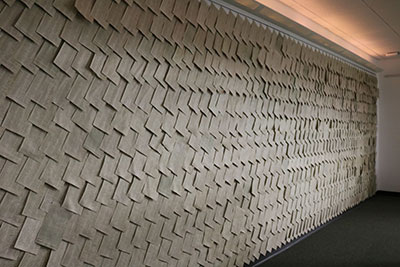 Drawing made from memory depicting the layout of Ravensbrück. Map indicates the location of the medical ward, first buildings to the left of the gates, where the women (‘rabbits’) were experimented on. Located 90km north of Berlin, the camp was imfamous for the medical experiments imposed on female Polish political prisoners.  The experiments often caused severe damage to the women's legs causing them to 'hop'. These women, if they survived, were called 'rabbits'. 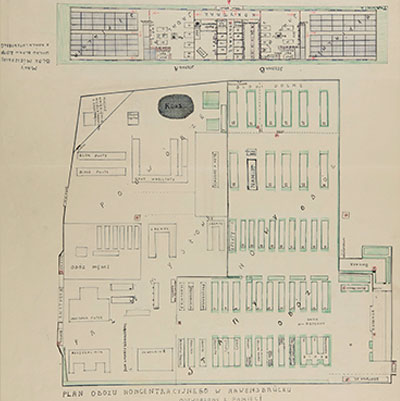 Photograph of Joanna Szydłowska Taken During Registration at Ravensbrück | 1944

Joanna Szydłowska (1907-1994) was subjected to the medical experiments while imprisoned; victims of the infamous experiments were known as ‘rabbits.’ Joanna secretly took pictures of her fellow inmates’ mutilated legs documenting the camp’s horrors with a secret camera. After being rescued by the Swedish Red Cross, she and other victims of the experiments testified to the Human Rights Division of the United Nations. While in the United States, surviving ‘rabbits,’ including Joanna, were treated by American doctors who worked to repair their legs. Joanna eventually returned to Poland and opened a jewelry shop in Lublin. 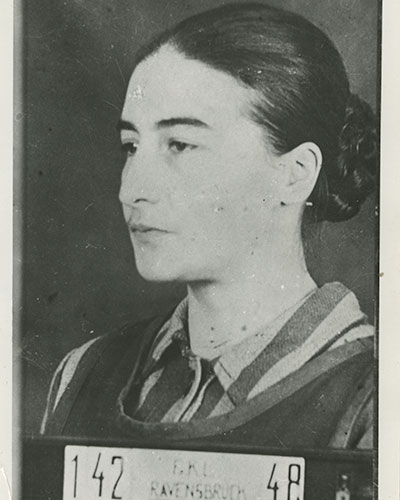 Letter (written in Polish; English excerpt is provided underneath) by Janina Iwańska, who was imprisoned at Ravensbrück. Though correspondence was under strict regulation, some prisoners managed to secretly communicate with their families through coded messages. In this letter Janina’s repeated requests for toothpaste suggest that she is expecting a message delivery. Though this letter is not encoded with urine, it was Janina’s idea to create invisible ink made of human urine, which some prisoners used to inform their families of the medical experiments performed at the camp.


On loan from the Polish Research Institute in Lund, Lund University Library, Sweden. 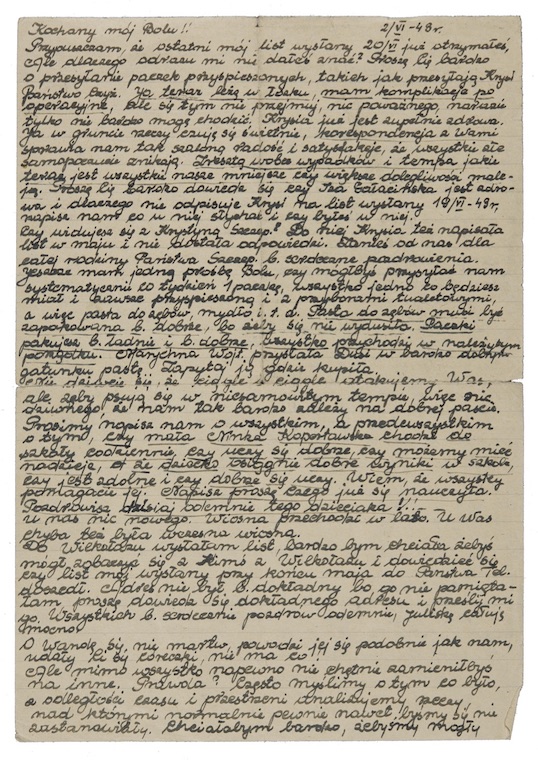 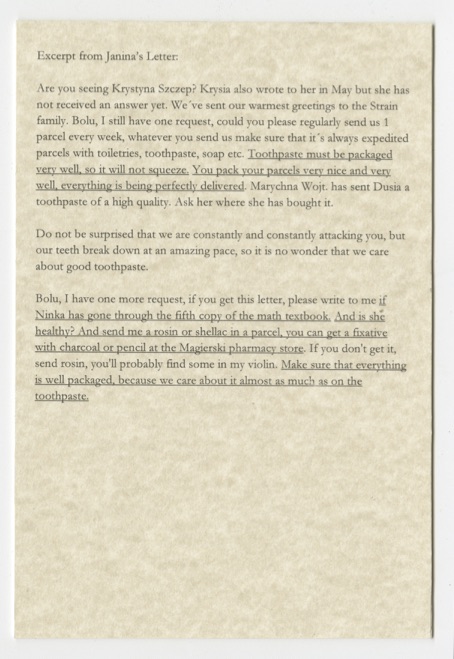 Book of Poems, Prayers, and Songs

The textile cover is made from a prisoner uniform. The red triangle and letter “P” identify the notebook’s creator as a Polish political prisoner at Ravensbrück. Pencil drawing depicting a woman knitting, made by Jadwiga Simon-Pietkiewicz in Ravensbrück concentration camp. Dated May 18, 1944. It was common for the women of Ravensbrück to draw portraits of one another or themselves, as well as compose poetry and perform other creative tasks to pass the time and find some measure of comfort during their imprisonment.

On loan from the Polish Research Institute in Lund , Lund University Library, Sweden. 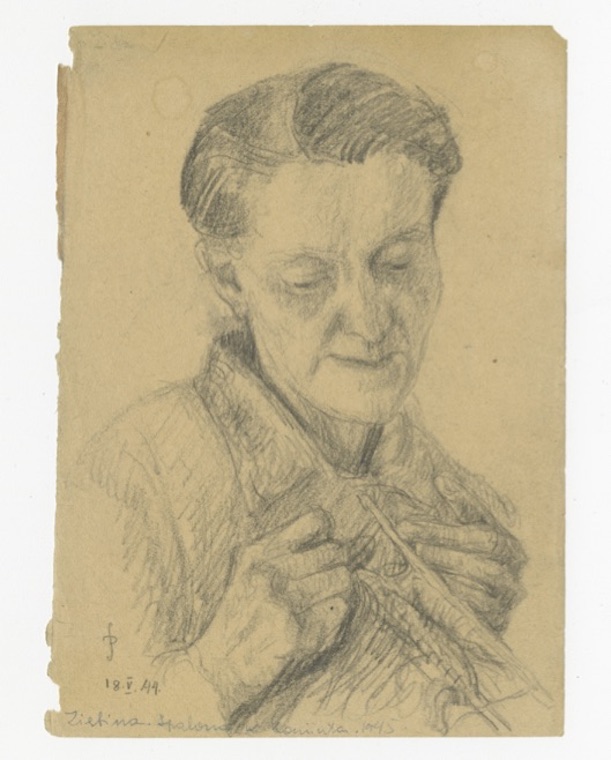 A drawing of a fellow prisoner looking out the window. The memory book includes notes about and from the women at Ravensbrück. The book is dated February 22 - May 22, 1944.


On loan from the Polish Research Institute in Lund , Lund University Library

Apolonia Byrska was arrested by the Gestapo in 1942 and brought to Ravensbrück as a political prisoner (indicated by the red triangle patch on the shoulder). In early 1945, Apolonia became ill and was confined to the infirmary. When the transports arrived, Apolonia bravely escaped the infirmary through a window. She was rescued by the Swedish Red Cross White Bus Rescue Action and arrived safely in Malmö, Sweden.


“The Nazis wanted to crush us, to take our human dignity from us. The hunger and cold were hard. So was the doubt: ‘Who am I?’ The guards hit us and shoved us all the time. They showed us the chimney stacks and said: ‘That’s the way you’re getting out. No other way!’”


Apolonia Byrska’s prisoner uniform is on exhibit for the first time. Her name, circled in red, can be found on the passenger list wall.


On loan from the Polish Research Institute in Lund, Lund University Library 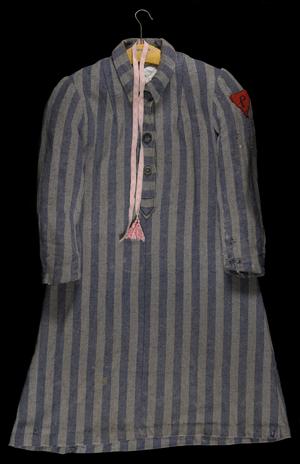 
Translated from the Polish written on the inside left:

“My only tear
It´s a thousand of their tears
I´ve never known that a day has so many hours,
And an hour so many minutes
Don´t come back Wanda, It´s not worth it…
Wanda 75 664”


On loan from the Polish Research Institute in Lund, Lund University Library CLICK HERE TO SUPPORT the archive's WORK
When making a contribution please be sure to select “library archives“ for your gift designation. We thank you so much for your support!