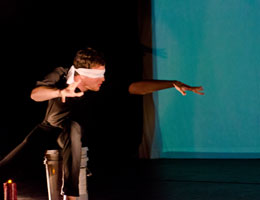 FGCU’s annual melee of time-sensitive art is back again for the eighth consecutive year. Creative and sleep-deprived students churn up the minutes in a mad race against the clock to produce the best stage play, film, music, or artwork completely within 24 hours. For each of the past seven years students at FGCU have met in a creative competition that draws from their unique capacity for procrastination and their tremendously dynamic creativity. At 6 p.m. on Friday September 12th they are given a list of items that have to appear in their film, stage play, visual or performance art, dance, or music, and at 6 p.m. on Saturday the 13th they submit their finished product. The public is invited to see the results at 8 p.m. that is as unexpected as it is entertaining.

Tickets for this event are free and will be available at the door on the evening of the event.

Based upon the gospel accounts of Matthew and Luke in the Bible as told by playwright John Michael Tebelak and composer/lyricist Stephen Schwartz, this Tony Award-nominated story focuses on the life of Jesus and his earliest followers and features songs in styles ranging from pop to vaudeville.

Director Mark Danni has assembled a cast of professional actors (members of the Actors Equity Association) and FGCU students. Karen Molnar will choreograph and Robin Frank (a FGCU faculty member) will music direct as well as play the piano.

Equity actors include Alex Jorth as Jesus. Jorth returns to TheatreZone after his debut performance as the charismatic Frankie in the season 9 finale production of Forever Plaid. TheatreZone fan favorite Gerritt VanderMeer (also a FGCU faculty member) has a brief scene as John the Baptist and the announcer of the coming of the messiah. VanderMeer also plays Judas, shifting his character from good to evil with the drop of a parable. Carolann Sanita-VanderMeer (another FGCU faculty member) most recently seen as Tracy Lord in TheatreZone’s production of High Society will play one of the disciples. Daniel Schwab, who has acted in several TheatreZone productions including Little Women, Grand Hotel and 110 in the Shade, has also been cast as a disciple.

The six other disciples will be played by FGCU theatre/music students and the live band conducted by music director/pianist Robin Frank, accompanied by FGCU music students playing guitar, bass and drums.

Godspell will take place in the cozy 100-seat FGCU TheatreLab.

*Please note that tickets for this production are not available through the FGCU Box Office and are not a part of FGCU's subscription series.

The story of two youngsters whose parents wish them to marry. The young people are determined to take matters in their own hands and refuse to fall in with their parents' plans. The fathers then pretend to a mortal enmity, which brings the young people together, but only after the boy and girl have run away from home and returned disillusioned.

Disphotic Twilight Zone brings audiences into a unique world of sights, sounds and occurrences. Drawing from happenings and behaviors in both the ocean zone of depth where little light is found and the science fiction/psychological thriller television show of the late 1950’s-early 1960’s, to which the title references, dancers create a world of twists and turns, where patterns emerge and dissipate and the unexpected emerges. Lynn Neuman, FGCU dance instructor and director of Artichoke Dance Company in New York, creates the movement and directs the action. Joshua Davis, director of Jazz Studies at Susquehanna University, provides live original music.

A sexy flight attendant, an attractive cougar, a dreamy voiced actor, and a priest (not really) tackle romance on the move. A brand new comedy with a fresh take on love in the modern world. It’s all fantasy, baby.