Marieb College’s Trudi-Ann Dyer and Zac Gelow attended the United Way 2021 Campaign Kick Off event on Wednesday November 3rd. The much-anticipated event took place at the Caloosa Sound Convention Center in Downtown Fort Myers. The “Back to the Future” themed program consisted of stories from individuals in need who benefited from the United Way campaign over the years. A 2022 car was given away to one lucky donor and there was a touching tribute to David Lucas who has contributed millions of dollars to the United Way Campaign of Lee, Hendry, Glades and Okeechobee counties.

The 2021-2022 campaign goal is to raise 11.3 million dollars. As the Marieb College United Way Campaign representatives, Zac and Trudi-Ann will be spearheading the campaign again starting in February 2022. Last year, the university raised almost $75,000 in generous donations. That wouldn’t have been possible without the generosity of the college’s faculty and staff.

Attendees received a visit from “Doc” and Marty who were played by the 2021-2022 campaign co-chairs Corey Vertich and Noelle Branning. Representatives from FGCU were excited for their photo opp with a replica of the DeLorean from the Back to the Future movie. 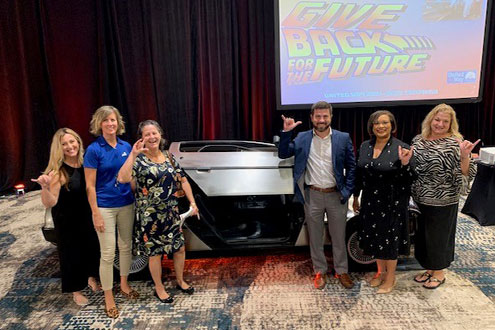