The best in business

Beta Gamma Sigma (BGS) is an international honor society recognizing the outstanding academic achievements of students enrolled in collegiate business and management programs accredited by AACSB International. Invitation for membership is sent out in the Spring.

Only the top 5 percent of business programs worldwide are privileged to host a chapter of Beta Gamma Sigma, and only the top 10 percent of juniors and seniors and top 20 percent of Master’s candidates are invited to join each year. Beta Gamma Sigma membership signals excellence to colleagues and potential employers, and marks a person as one of the top students at the Lutgert College of Business. 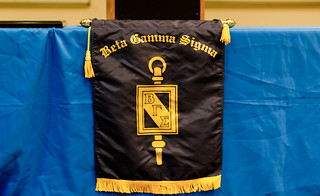 Each year the top 10% of junior and senior business majors and top 20% of masters’ candidates are invited to join the international honor society Beta Gamma Sigma. The Lutgert College of Business recognizes its most outstanding scholars by offering an invitation to these students. Each year the FGCU Chapter of Beta Gamma Sigma (BGS)’s student officers select a prominent community member to recognize with an honorary membership into the international business honor society. Chapter Honorees must have achieved distinction primarily in business and administration and demonstrate those qualities that Beta Gamma Sigma fosters, including honor, wisdom, and earnestness. This year, the chapter chose to recognize Ryan Carter, Co-Founder and Executive Vice President of Scotlynn USA Division, Inc.

Lutgert proudly hosts a chapter of the international honor society Beta Gamma Sigma (BGS), open by invitation to the top 20% of junior and senior business majors and top 10% of MBA candidates. In September the chapter learned it had qualified for Highest Honors Status for the 2019-2020 academic year.